In the Spirit of Thanksgiving: Sarah Josepha Hale

Before memories of Thanksgiving 2019 fade away, we want to take the opportunity to highlight the important role of American author and magazine editor Sarah Josepha Buell Hale (1788–1879) in promoting a national thanksgiving day.

In the entry about Hale in the reference work American national biography, Joyce W. Warren notes that through her writing and editorial work Hale “led numerous causes,” among them completion of the Bunker Hill Monument, preservation of Mount Vernon, and making Thanksgiving a national holiday. The many works by Hale in the Cairns Collection of American Women Writers illustrate her determined advocacy of a national day of thanksgiving in November, from her early novel Northwood: A tale of New England (2 vols., Boston: Bowles & Dearborn, 1827) to her work as editor of the Ladies’ magazine, “the first American periodical planned exclusively for women,” and literary editor of Godey’s lady’s book.

In Northwood: A tale of New England, for example, Hale had the character Sidney write his friend Mr. Frankford that “Susan has consented to give me her hand on our annual Thanksgiving, which is usually held in the month of November” (v. 1, p. 170).

Hale later devoted chapter IV in her Manners, or, Happy homes and good society all the year round (Boston: J. E. Tilton and Company, 1868) to “Our national thanksgiving day,” mentioning her own twenty years of effort in Godey’s lady’s book to urge “upon the attention of its readers and friends, year by year, the plan of a National Thanksgiving day” (p. 333) on the last Thursday in November: “This time was selected because then the agricultural labors of the year are generally completed, the elections over” – not so now – “and the summer wanderers are gathered to their homes” (p. 334). She observed that the day was thus honored in 33 states and territories, including Wisconsin, in 1859; Lincoln then proclaimed a day of national thanksgiving in 1863 despite the war between the states; and at last in 1866 “President [Andrew] Johnson’s Proclamation for the National Thanksgiving on the last Thursday of November, 1866, was observed over all the country” (p. 336).

Ronald Reagan’s Thanksgiving proclamation in 1985 specifically credited “the tireless crusade of one woman, Sarah Josepha Hale, that finally led to the establishment of this beautiful feast as an annual nationwide observance. Her editorials so touched the heart of Abraham Lincoln that in 1863 –even in the midst of the Civil War — he enjoined his countrymen to be mindful of their many blessings ….” Interestingly, we learn from documents digitized by the National Archives that the text of President Reagan’s proclamation in 1985 was approved by John G. Roberts, then associate counsel to the president (and now chief justice of the Supreme Court).

For a mid-19th century appreciation of Hale, see Female poets of America: With portraits, biographical notices, and specimens of their writings, compiled by Thomas Buchanan Read, seventh edition revised (Philadelphia: Published by E. H. Butler & Co., 1857), including this brief biographical notice (p. 181) and the portrait above: 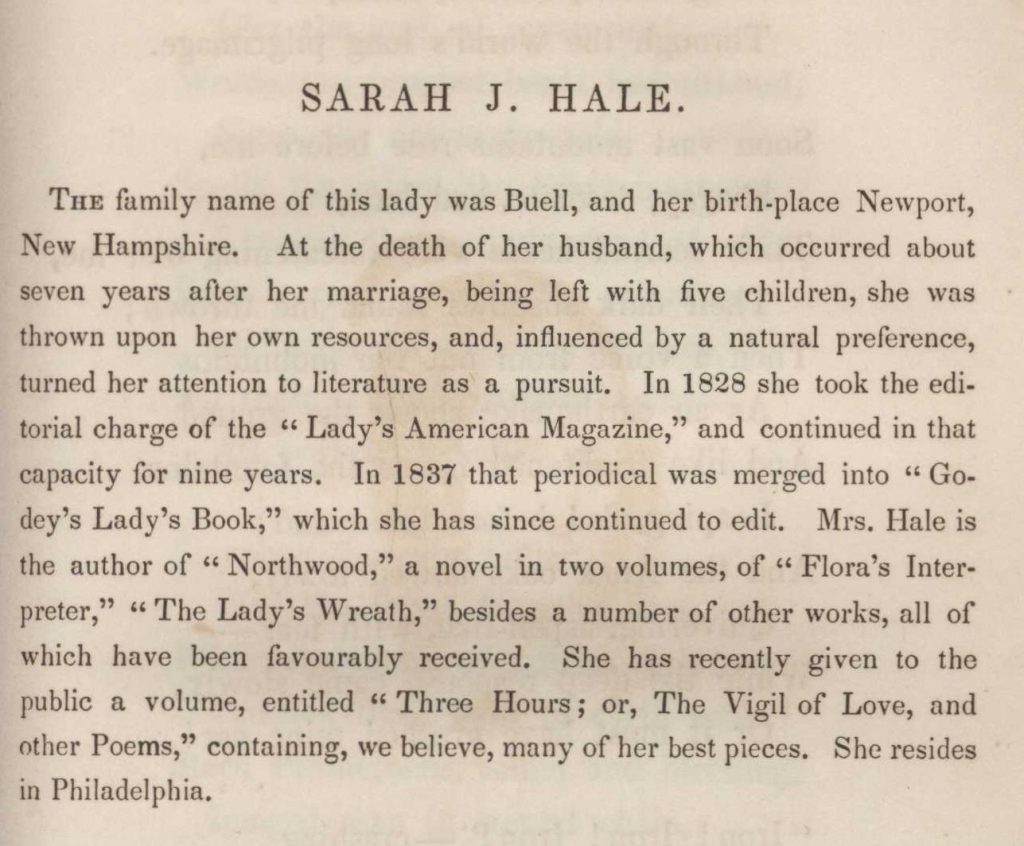 By the way, Hale’s best known poem was “Mary had a little lamb,” first published in Poems for our children (1830), and frequently reprinted, often without credit to its author. Thomas Read did not even mention it. Long after Hale’s death, however, an edition of this collection of poems — also available in the Cairns Collection — gave Hale full credit on the title page: Poems for our children: Including Mary had a little lamb (Boston: R. W. Hale, 1916).

We welcome your attention to these and many other works by Hale in the Cairns Collection.