To welcome the first day of spring tomorrow, we offer details of hand-colored engravings and distinctive bindings from our holdings.

Our copy of Margaret Roscoe’s Floral illustrations of the seasons, consisting of representations drawn from nature of some of the most beautiful, hardy and rare herbaceous plants cultivated in the flower garden, carefully arranged according to their seasons of flowering, with botanical descriptions, directions for culture, &c. (London: R. Havell [etc.], 1838), from the Thordarson Collection, features a handsome Riviere & Son binding, like many Thordarson books (though it is closer to a very dark blue than to Thordarson’s customary green).

Both the title page and the hand-colored plates themselves made clear the important role of Robert Havell, Jr. (1793-1878), probably best known as the principal engraver of Audubon’s Birds of America. 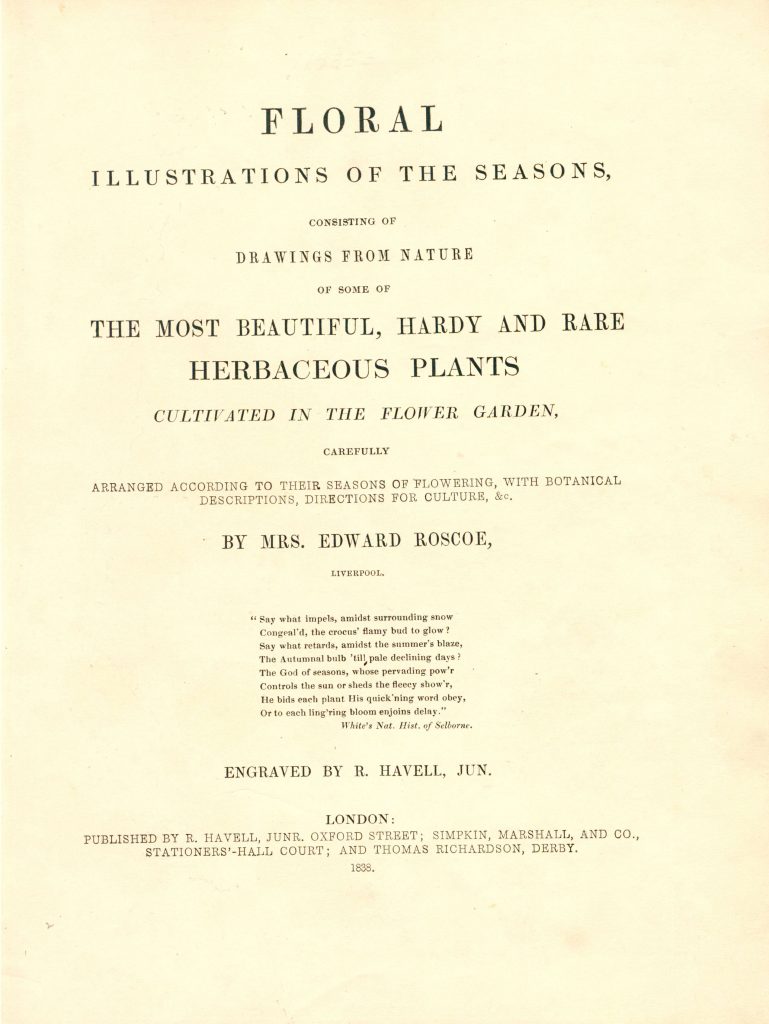 The author, wife of Edward Roscoe of Liverpool, offered the work “to the particular notice” of “her own sex” as a “useful and correct guide to their tastes both in their selection for a flower garden, and as objects for their pencil.”

For spring, introduced with a short verse from Thomson’s Seasons,

And in a mingled wilderness of flowers,

The breath of Nature, and her endless bloom,”

the choices included the familiar “two-leaved squill” (see the online Biodiversity Heritage Library for many citations of this plant):

We have several copies of a “new and enlarged” edition of Frances Theodora Parson’s According to season: Talks about the flowers in the order of their appearance in the woods and fields (New York: Charles Scribner’s Sons, 1902), the cover of which appears in the digital collection Publishers’ Bindings Online, 1815-1930, a joint undertaking of the University of Alabama Libraries and the UW-Madison Libraries. One of our copies is in the Cairns Collection of American Women Writers; two others are part of a substantial collection of works with bindings designed by Margaret Armstrong. The latter collection, assembled by Marjorie Woodward Hood, class of 1940, was the generous gift of her daughters.

Also represented in Publishers’ Bindings Online is our copy of Bliss Carman, The kinship of nature (Boston: L. C. Page & Company, 1904), which includes chapters entitled “At the coming of spring” and “The vernal ides.”

The signed binding – note the “FP” on the front cover – is attributed to Florence Pearl Nosworthy.

For more examples of spring green, see the description and checklist for our exhibit Green, Green, It’s Green, They Say (2015).