Recent images of the Eiffel Tower prompted us to explore manuscript and printed sources in Special Collections that help provide historical context for the prominence of the tower in views of Paris.

A large panorama within offers this detail of the tower, at the heart of the exposition honoring the centenary of the beginning of the French Revolution 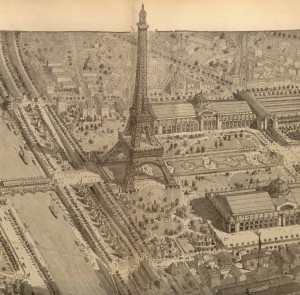 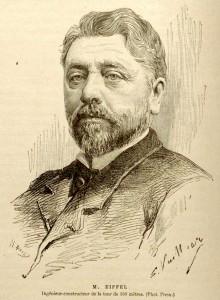 A more personal view of Paris two decades after the exposition comes from Anna Grant Birge, 1851-1919, The round robin: A journey across the Atlantic, around the Mediterranean, and through Western Europe, Part 2 (1909). This is a lengthy typescript, with photographs pasted in on separate unnumbered leaves, bound in two volumes; and issued in a limited edition of two copies in May 1909. The volumes consist of letters home written as a “round robin” by Anna Grant Birge, wife of Edward Asahel Birge, and Nan (her daughter Anna).

Edward Asahel Birge, professor of natural history and longtime dean of the College of Letters and Science (1891-1918) at the University of Wisconsin, would serve as UW president from 1918 to 1925. For more about Edward Birge, see https://cms.library.wisc.edu/archives/exhibits/campus-history-projects/chancellors-and-presidents-of-the-university-of-wisconsin-madison/edward-asahel-birge-president-1918-1925/.

Writing on June 16, 1908, from “Paris, Hotel Ste. Anne, 11 Rue St. Anne” [sic], Anna Birge reflected on prosaic differences between Madison and Paris: “And somehow the streets of Paris are not as remarkable for their cleanliness as we have been brought up to think them. Though that is not saying that they are not a thousand times cleaner than the streets of our home town of Madison. There’s no comparison between the Avenue de l’Opera, for instance, and our old  State Street as far as cleanliness goes, as well as in other respects.”

The round robin and a similar account of a later trip are both preserved in the Cairns Collections in the Department of Special Collections. These diaries have also been digitized as part of the UW Digital Collections.