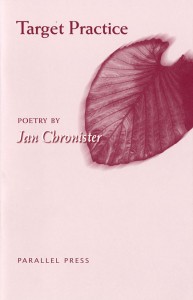 Jan Chronister has been writing poetry for over forty years. She has been published in state, regional, and national anthologies and is a two-time winner of the Lake Superior Writers Contest. She has also won awards in contests sponsored by the Wisconsin Fellowship of Poets, the Tallgrass Writers Guild (IN), and the Brainerd (MN) Writers Alliance.

Jan is a contributor to Dust & Fire, an anthology of women’s writing published annually by Bemidji State University, and received their 2008 Diane Glancy Award for Poetry. Her poetry also frequently appears in the Wisconsin Poets’ Calendar. Twelve of her poems have been published as collaborations with printmakers by the Northern Printmakers Alliance in Duluth, Minnesota.

Jan currently teaches college-level English as an adjunct instructor. She has a son and daughter, both graduates of UW-Madison, and two grandchildren. She lives with her husband in the woods near Maple, Wisconsin.

Target Practice was recently reviewed in an issue of Verse Wisconsin.

Wynken, Blynken, and Nod
was a Milwaukee motel
where high school Romeos
took their dates.
My boyfriend gondoliered me there
one Saturday night.

All I remember
are three neon heads
and feeling awfully sick.

Sunday morning
my cargo of guilt
almost sank me.