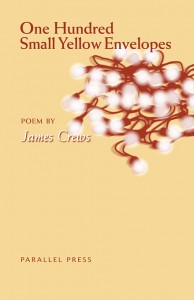 James Crews holds an MFA in Poetry Writing from the University of Wisconsin-Madison. His poems have appeared in Best New Poets 2006, Columbia, Crab Orchard Review, Court Green, basalt, and other journals. Last year his manuscript, Bending the Knot, won the 2008 Gertrude Press Chapbook Prize. He was the 2009 recipient of the Bernice Slote Award for Emerging Writers from Prairie Schooner. He has most recently taught literature and writing at Eastern Oregon University in La Grande, Oregon.

One Hundred Small Yellow Envelopes was recently reviewed in an issue of Verse Wisconsin.

(City of Gold, City of Salt)

Finally, a man I was willing
to follow down these streets, still slick
with last night’s possibility as we came
to the flaking sign–Salt Depot—
where Ross opened the rusted gate,
pointed up at the mountains
and mountains of salt New York stores
for winter. First light caught
on them until they all shone
like the lost city of gold
Coronado spent half his life trying
to find. We climbed one of the mounds,
looked out across the city. Falling
down, we lay on gold, on flawless salt.