Good Men: The Lives and Philanthropy of Irwin A. and Robert D. Goodman 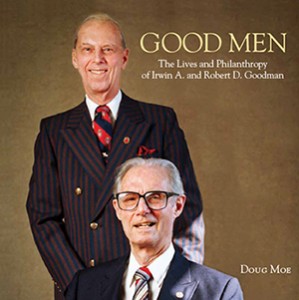 Bob and Irwin Goodman came to Madison from Minnesota as young men in the 1930s, and across the next seven decades, made the city the beneficiary of their extraordinary good will and philanthropy. Former Madison mayor Dave Cieslewicz said the Goodmans, whose State Street jewelry store served generations of city residents, set a “gold standard” for philanthropy in Madison. Their gifts helped build the first community swimming pool, an east side community center, a Jewish community campus in Verona, and much more.

But while most everyone knew the Goodman name, few really knew Bob and Irwin, for the brothers were private people. This abundantly illustrated biography tells the story: their births in St. Paul; their arrival in Madison; their passion for sports, the jewelry business, healthy living, and, especially, philanthropy; and their lifelong devotion to their mother, and each other. Good Men is a tribute to two extraordinary individuals who adopted the city of Madison almost as family, and in doing so made it a much better place.

Doug Moe has been a journalist in Madison for nearly four decades. He has written a daily newspaper column about the city for the past 18 years, most recently for the Wisconsin State Journal. His previous books include The World of Mike Royko, a Chicago Tribune Choice Selection of the Year; and Lords of the Ring: The Triumph and Tragedy of College Boxing’s Greatest Team, runner-up for the August Derleth Award for the best non-fiction book of the year by a Wisconsin author.