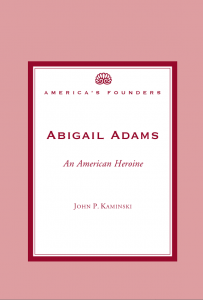 The fifth chapbook in the America’s Founders chapbook series is Abigail Adams: An American Heroine. Abigail Adams was an extraordinary person. In many respects she was the quintessential woman of the American Revolutionary era, but in virtually every facet of life she excelled her contemporaries. Through her unique partnership with her husband, John, Abigail Adams became one of the most influential women in all of American history. Through her voluminous correspondence, this fascinating personality reveals the hardships women confronted during the years of America’s founding. Abigail Adams was born in November 1744 and died almost seventy-four years later in October 1818.