To Sit Beside a Bird is Infinite Enough 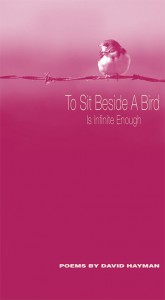 David Hayman sailed to Paris in 1950, convinced that poetry was his destiny. He told friends of his calling and even submitted “poems” to a fledgling periodical. He wrote his wife-to-be promising a bohemian future as starvelings—she came anyway. Their first three months were spent on the road, thumbs extended, literally hitching their way around France. Through it all, imbued with a heady sense of “purpose,” he was reading Joyce and the Symbolists; talents he decided were too big for emulation. When he began working in earnest for his degree at the Sorbonne, his muse paled further, or rather dried up; so that, in the fifty years that followed, he felt free to sate his creative urges with scholarship, teaching, and publication. Oh, it was a good life, rewarding enough to feed his family and ego.

It was after he and his wife built their house on Deer Isle in Maine that he found what turned into the essential community. The atmosphere and encouragement there turned his winters into incubation periods and his summers into. . . Almost spontaneously, he rediscovered forgotten joys of a discovery, naturally occurring and sparse but welcome. In 1999, he gave up teaching but continued his scholarship and publication, on both Joyce and Samuel Beckett.

Most of the verse and prose in this volume dates from the pre- and post-retirement years. The four published items first appeared in the second number of The Eggemoggin Reach Review, a little magazine produced with care and love by the supportive members of the Deer Isle writers’ groups. They have his thanks. Thanks also to Ken Frazier and Elisabeth Owens at the University of Wisconsin–Madison Libraries, and to Nancy Brower and Earl Madden at University Communications.

They yield to the wind
Tremble vociferously

Immobile they can be moved
Riven by lightning’s surprise
Infested with rot, ants, termites
Sawed or chopped by woodsmen
Or view hungry householders