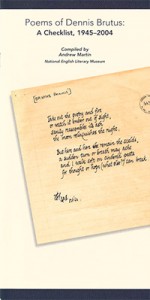 Dennis Brutus is a world-renowned South African poet, scholar and activist. In 2004, he turned 80 years old and it seems fitting to honor the occasion by producing Poems of Dennis Brutus: A Checklist, 1945-2004, as a record of his entire corpus to date of published poems. Brutus’ poems were published extensively outside of South Africa; however, this publication brings to light the little known fact that Brutus also published poems in South Africa — this despite being banned and proscribed by the South African Government and imprisoned on Robben Island. Brutus left South Africa on an exit visa in 1966 and has been a resident of the United States for more than 30 years.

It is hoped that Poems of Dennis Brutus will serve both as a useful guide to finding a favorite Brutus poem and as an invitation to scholars unfamiliar with Brutus and his poetry to conduct their own search.

Andrew Martin, a bibliographer/literary researcher at the National English Literary Museum (NELM) of Grahamstown, South Africa, has compiled this checklist, drawing from research for a bibliography of black South African literature in English that he is compiling for NELM. This volume also contains a preface by Dennis Brutus and a tribute by Bernth Lindfors, professor emeritus of English and African Literature at the University of Texas at Austin.