If the Whole Body Dies: Raphael Lemkin and the Treaty Against Genocide 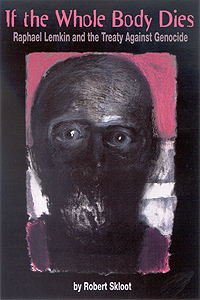 Robert Skloot (rskloot@wisc.edu) has taught and directed plays at the University of Wisconsin-Madison since 1968 and served as an associate vice chancellor from 1996 to 2002. He is the author of The Darkness We Carry: The Drama of the Holocaust (1988) and the editor of the two-volume anthology, The Theatre of the Holocaust (1982, 1999). He served as a Fulbright Professor in Israel, Austria, Chile, and the Netherlands, and he holds a joint appointment in the UW-Madison’s Mosse-Weinstein Center for Jewish Studies.

“Robert Skloot is to be commended for bringing Raphael Lemkin to life and for bringing to a new generation the work and complex personality of the man who coined our word genocide to describe this ever-present global tragedy. We remain solidly in his debt. Kudos!”

“As challenging as it is thoughtful, Robert Skloot’s play makes clear that Raphael Lemkin’s battle against genocide is far from over. “Will genocide ever end?” and “What can I do?” are the questions that are embedded in Skloot’s rich and well-crafted script. As the curtain falls, choices awaiting us form the next act of this drama of courage, loneliness and despair.”