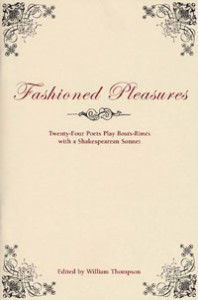 The idea that would be collectively borrowed to generate the sonnets gathered herein occurred to Stephen Cushman when he came upon a photograph of his young son playing “dress-up”: just as the boy had donned someone else’s clothes, so would the poem the picture inspired adorn itself in another poem’s rhymes. Cushman had chosen, then, to play a private round of bouts-rimés, whose rules require a new poem to be fitted with a prescribed sequence of rhyme-words. The sequence he assigned for himself came, appropriately enough, from Shakespeare’s “Sonnet 20:”

A woman’s face, with nature’s own hand painted,
Hast though, the master mistress of my passion—
A woman’s gentle heart, but not acquainted
With shifting change, as is false women’s fashion;
An eye more bright than theirs, less false in rolling,
Gliding the object whereupon it gazeth;
A man in hue all hues in his controlling,
Which steals men’s eyes and women’s souls amazeth.
And for a woman wert though first created,
Till nature as she wrought thee fell a-doting,
And by addition me of thee defeated,
By adding one thing to my purpose nothing.
But since she prick’d thee out for women’s pleasure,
Mine be thy love, and thy love’s use their treasure.

The usual formal demands already make it difficult enough to write a good sonnet; to write one with the rhyme words chosen in advance is rather like escaping from a straitjacket — with no visible signs of struggle. Bouts-rimés is indeed a formidable game, rarely played today. The scholar Clive Scott has noted that even the seventeenth-century Parisians who first attempted it found that it “tried the ingenuity of even the most considerable poets.” Fortunately, some contemporary poets, such as those featured in this little book, find a technical challenge hard to resist. The result in this case is an eclectic variety of sonnets, each fashioned around the shaping code of Shakespeare’s invention.

“One for the Scrapbook” by Stephen Cushman

Lips like those, who cares if they’re not painted?
And what of it if the red dress shows a passion
For dressing up in Mother’s clothes? Well acquainted
With much stranger things, let’s enjoy the fashion
Statement a flowered hat makes and quit the rolling
Of our eyes. So he’s a boy. Ten? Eleven? One gazes
At the photograph in shock: no use controlling
The love of beauty. Wow. But what amazes
Even more is how — how he has created,
With long white gloves and crossed bare legs, this doting
On his lowered eyes and face in profile, how defeated
All resistance? My son. He came from nothing
In the beginning but pulsings of pleasure.
To think I’d hoped a girl would be my treasure.