As you enter the Memorial Library lobby, you will see a mural to your left along the west wall. James Watrous, an Art History professor at the UW-Madison for 41 years, created the 12-by-20-foot mosaic between 1974 and 1977. It was funded by the UW-Madison Classes of 1959 and 1960. The artist’s notes observe that all libraries, past and present, preserve and transmit human perceptions. Symbols, sounds, and images provide age-old means to communicate these images—through written (or printed) symbolic languages of words and signs, through sound recordings, and through drawings, diagrams, and photographic images.

The artist sought to capture the role of libraries in preserving and transmitting these perceptions of the natural and civilized worlds. Throughout the mosaic are symbols of ancient elements—earth, air, fire, and water—and of the heavens—sun, moon, planets, and stars. The mural also includes two constellations—Draco, the Dragon, and Sagittarius, the Centaur with the Bow, or the Archer. 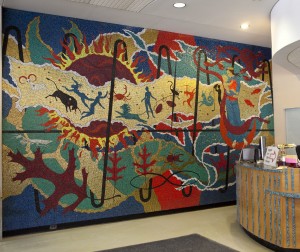 Within the imaginary “gold belt of the heavens” (the apparent path of the sun, moon, and planets) are the twelve Symbols of the Zodiac. They carry ancient connotations, such as the twelve periods of the calendar year, the changing of the seasons, as well as differing human characteristics or fates.

In the upper right are depictions from human perceptions of good and evil. Botanical and zoological images cover the lower area—a praying mantis, oak leaves, trees, a stag beetle, octopus, and sea horse. To suggest auditory perceptions, the artist introduced a symbolic black sound wave that flows as a unifying ribbon throughout the mural design.

In the lower center is the mathematical symbol, or sign, for the perception of infinity ∞. Above it is the symbol for integration ∫.

The traditional mosaic materials used for the mural, gold Byzantine glass and colored smalti, were imported from Murano, the island famous for glass-making, at Venice. They were purchased with funds provided by the University of Wisconsin Foundation, the Thomas Evans Brittingham Trust, and the Classes of 1959 and 1960.

The design on the front of the desk uses a water theme that relates to the Memorial Library’s geographic location on the Madison isthmus. The time of its creation, the spring of 1993, was also one of the wettest on record. The name comes from the term for clouds that portend heavy weather.

The differing heights of the top and shifts in the direction of the wood grain provide a subtly varied background for the strong visual elements of blue plastic and the fluid geologic form of the right end. The desk vigorously represents water near the entrance, resolving into evaporation, into groundwater, and into rivers as one proceeds past the desk and into the lobby, leaving the street behind, ready for what the library has to offer.

The artist used white oak and recycled plastic to create the desk. Since 1971 Kevin Earley has designed and built furniture using many different materials and techniques. From his studio in Madison, his work has traveled to homes, offices, and galleries throughout the country.

The Wisconsin Arts Board’s Percent for Art Program provided funds for the desk.