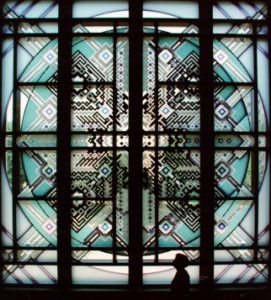 Library Window is a work by Ed Carpenter from Portland, Oregon. The piece was commissioned through Wisconsin’s Percent for Art Program.

The window’s design juxtaposes the traditional and contemporary, alluding to traditional folk patterns as well as computer circuitry. In designing the piece, Carpenter considered the site’s characteristics, including the idea of information storing, a role that libraries and computers both share and that business relies on. The design also acknowledges the building’s neo-traditional style by creating a circle within a square, a time-honored architectural motif.

Foregoing the familiar stained glass methods, Carpenter employed his innovative method of placing thousands of glass marbles into a custom acrylic grid then applying copper and sandblasted glass panels. The integration of dichroic glass adds another dimension because of its variable neon-like purple and green hues.

Ed Carpenter is the grandson of a painter/sculptor and stepson of an architect in whose office he worked as a teenager. He studied architectural glass design in England and Germany. Since 1972 he has completed more than fifty large scale collaborative art commissions throughout the country including sites in Oregon, Alaska, California, Minnesota and Miami International Airport. He lives with his wife who is a musician and his four year old daughter in the Coast Range Mountains of Oregon.

The Percent for Art Program, established in 1980, allowed two tenths of one percent of the construction costs for new state buildings to be set aside for the purchase or commission of artwork for permanent public display. The program was operated by the Wisconsin Arts Board, the state agency responsible for the support and development of the arts throughout Wisconsin.