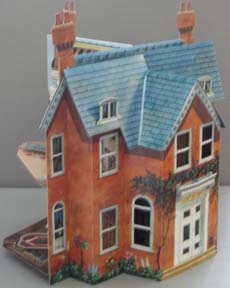 On view are thirteen specimens of pop-up books on the theme of architecture.  The three-dimensional paper models range from the Forbidden City in Beijing, China to a Victorian dollhouse in the round; from ancient, Medieval, and Renaissance buildings to modern works by Antonio Gaudí and Frank Lloyd Wright.  Two other structural models—an imaginary aqueduct by M.C. Escher and the landmark Brooklyn Bridge—are also on display.  Pop-ups are defined by the automatic movement that occurs when their folded pages are opened. The movable mechanisms employed bring collapsed structures to life creating a sculptural and interactive format.  Some of the pop-up books also use tabbed props to add dimension and spatial play.  Both building exteriors and cutaway views of interiors are featured in these dynamic works by paper engineers Lothar Meggendorfer, Keith Moseley, Iain Smyth, and others.